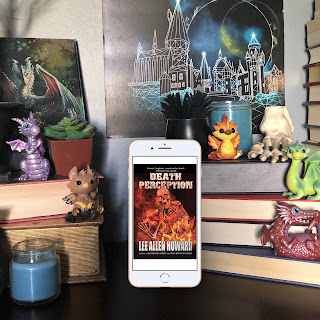 Kennet isn’t your average teenage boy. His bedroom is a closet in the nursing home facility he lives in with his mother. His job, cremating bodies at the nearby funeral home. But what really sets Kennet apart is his special ability. When he opens the furnace to take out someone’s ashes, he’s able to sense how they died, his death perception. Things really take a turn when his death perception gives him a cause of death that’s different from the death certificate.

This isn’t a very action-packed story, but it is thrilling, with a cast of characters who each have their own story. But the stories all intertwine and affect each other. As the story progresses, we learn more about people’s pasts that lead them up to this point. We have Flavia Costa, who owns the nursing home Kennet and his mother live in. She holds resentment at her family for being left with nothing, leaving her to work her way up on her own, with retirement plans as her main goal. Next you have Cecil Grinold, the owner of the local funeral home. Similar to Flavia, Mr. Grinold is all about his business, maximizing profits and planning to expand. Flavia and Cecil each have their own secrets and ambitions, leading them to certain actions that have major consequences. Then right in the center we have 19 year old Kennet. He’s stuck living at Flavia’s personal care home and cremating bodies for Mr. Grinold.

The thrill in this story isn’t a scary thrill, but more of a suspenseful thrill that keeps you hooked wanting to know what comes next for our characters. Also, this story is filled with supernatural and murder mystery aspects. The twists will keep you guessing. Lee Allen Howard wrote this perfectly. Plenty of details to let you picture everything as the story unfolds. Each character is well developed, with their own personalities that clearly sprout from their unique pasts. I enjoyed how the story would be told from everyone’s perspectives. It mainly is from Kennet’s perspective since he is our main character, but we the readers get to know what Kennet doesn’t yet know by seeing what other characters are up to or thinking.

All of the intertwining stories fully overlap towards the end in a rush of suspense. Ultimately, everyone gets what they deserve.

You can’t help but feel sorry for Kennet. We eventually learn that his father was abusive,  and during one of the conflicts his father ends up dead and his mother is left blind in one eye. Now to make matters worse, it seems like everyone is out to get him. Flavia wants him gone from her facility after his mother dies, and Mr. Grinold doesn’t want Kennet working for him.

From the beginning we know that Flavia and Grinold have secrets, but I didn’t expect anything so sinister. It’s clear from the start that Flavia wants to get as much money as she can out of her business, but I didn’t think she would kill patients to move through residents more quickly. As soon as we’re told she has killed a patient, though, I suspected that’s what she did to Kennet’s mom. Luckily, Kennet’s ability caught the murder. Also, Grinold is obviously concerned with running his own business, maximizing his profit, and doesn’t want anything ruining his reputation that would hinder his business. Once Dolores started blackmailing him I wondered what he would do to stop her. Just like Flavia, he killed.

I’m glad that things worked out for Kennet in the end. He was able to put a stop to Grinold and Flavia, as well as further his life.

“What’s a gift, unless it helps somebody else?”

“Physical death did not end existence. The dead live on forever.”