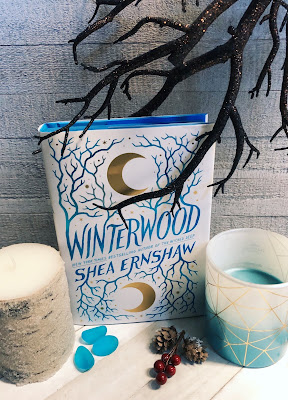 A witch who lives in the woods, stranded when a snow storm blows through. Across the lake is a boys’ camp, where an accident leaves one boy dead and one missing. Nora attempts to discover the truth about what happened while also finding herself.

I really liked the story, but I had a difficult time getting through this book because of the author’s writing style.

The story was very slow. I felt like there was so much describing, but not enough happening. The book would be about a third the length without all of the descriptions. I felt like there were too many metaphors, similes, and personification. There was always a comparison for every person, thing, and event to something else, basically every sentence was descriptive. It felt like too much to the point that I got lost in what was actually happening.
Also, I feel that there was overuse of the colon as punctuation. Almost every page had a colon on it, some pages didn’t, but some had it several times. It was used in place of a semicolon, or even when a simple period or comma would suffice.

About the actual story, almost every time Nora talked, either the words “slipped out before she could stop them” or she regretted what she said as soon as she said it. Nora came across as very unsure of herself. I suppose it’s partly because she doesn’t feel like she is a witch or a Walker. She also recently lost her grandma, so she probably feels alone and like no one understands her. I just prefer when a character has more confidence in herself.

This story is a mixture of modern times with older times. Since it takes place during a snow storm that has taken out the power, there isn’t electricity being used at all, plus the setting is within an old forest. However, it has a modern, young feel because of the characters, who act like typical teenagers. There is underage drinking and even a party. Additionally, be warned that there is some language throughout.

The story is told in first person, but with chapters switching between the perspectives of Nora and Oliver. I like the change of perspective since it really adds to the story and shows what’s going on with Oliver as well as the main character Nora. There aren’t that many chapters from Oliver’s perspective, but that adds to the mystery of what happened, which allows the reader to be more along the same lines as Nora and not know more than what she knows.

Entries from the Walker spellbook are placed throughout the book, which I found very interesting. It gives some background on the Walkers and what each one’s nightshade was. I would have liked to see more of the “spells” incorporated though. I also wish there was more incorporated with the woods, especially since the book is titled “Winterwood”. There were only really two, short scenes with the woods. However, I did feel like there was enough to show how the whole place was “alive”.

Even though the ending seemed really fast paced, I thought the book ended well, with some surprising twists that I didn’t see coming. I felt like there was also some closure at the end, questions answered and things figured out. It was tough, but I’m glad that I finished this book to see how everything came together.

The twists at the end are what really give the closure. First with the truth about the accident. Second with Nora finding her nightshade.

I was so surprised to find out that Oliver was the one who died. I thought that Oliver killed the other boy, most likely on accident. Nora had mentioned that Walkers could see ghosts, but it seemed like Walkers only saw them in the graveyard and they appeared in a way that Walkers knew they were ghosts. At first I thought that seeing ghosts more clearly was Nora’s nightshade. It made sense after it was clear, though, why Nora was the only person to see Oliver and how he “survived” in the woods for two weeks.

The second piece of closure, and second surprise, was Nora finally discovering her nightshade. She was able to turn back time in order to save Oliver. This also explained her feelings of deja vu and feelings of time moving slowly. I wish her nightshade was explained more in depth because it seemed like she could just turn back time, but then her chapter in the spellbook said that she basically time travelled. This is mostly where I wished the end of the book wasn’t so abrupt and had more detail. But I did think the ending was good, good enough to make me glad that I finished.

“Because I am more darkness than girl. More winter shadows than August sunlight. We are the daughters of the wood, my grandmother would whisper.”

“A sleeping forest will allow safe passage. But if it wakes, be prepared to run.”

“Into the Wicker Woods.
Nothing good lives here.”

“In winter, these woods feel like a fairy tale suspended in time - the princess forgotten, the hero eaten whole by a noble fir goblin. The story ended, but no one remembered to burn the haunted forest to the ground.”

“I am a Walker...I belong in these trees. Even if I’m not as formidable as my grandmother or as fearless as my mom, the same blood swells through my veins. Black as tar. The blood that gives all Walkers our nightshade, our ‘shadow side.’ The part of us that is different - odd, uncommon.”

“A bone moth.
The worst kind. The bringer of portents and warnings, of omens that should never be ignored. Of death.”

“The name that rings between my ears: Nora Walker.
The girl with moonlight in her veins.”