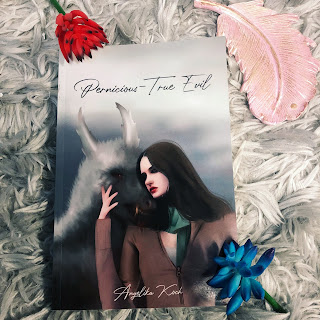 Astra has noticed some shadows seemingly following and watching her. She might just be seeing things due to her recent loss. Until two shadows in the forms of monsters attack her. She then wakes up on a strange planet. Another monster, similar to the first ones, informs her that she was brought here to destroy the human race.

My only critique is that there is a bit of an overuse of the pronouns of characters, which makes it hard to follow along. Most of the time I understand that “she” refers to Astra, but farther into the book there are several males, so I get confused who is being talked about.

However, I think that the characters and the world of Pannotia are cleverly created. I loved learning about the creatures and plants that live in this world. It’s completely unique, and also creepy, that the plants and even the ground seem to be alive. I think that I’d have an even harder time than Astra to eat what the planet offers.

There is so much detail put into each character and each aspect of the planet. But not too much that it loses you or takes away from the story. There is still so much to learn about each character.

This books ends on a cliffhanger, with the assumption that there will be another one. I wish that this book was longer, but I’m sure the stopping point is within reason for what comes next. We can finally start to understand some characters, and start to see the connection of the characters in the prologue to the main characters.

This was a real page-turner. I found myself constantly needing to know what happens next. I will eagerly be waiting for the next book to see how the story continues!

As a note or warning, there is some strong language used throughout. There is also mentions of drug addiction, rape, and suicide, which even though is not explained in full, lengthy detail, could still be hard for some readers.

The story begins with a prologue that introduces characters from the demon world. There is still a lot of mystery from this scene that is not explained yet in this book. We don’t know yet what Lamia did that Cadoc found out about and is after her for. I am assuming it has to do with helping Astra since we find out that Lamia’s love is Vojin, who is the friendly demon trying to help Astra once she is on Pannotia. We also don’t know what exactly Zephyra did to Lamia to save her. We do however find out that towards the end of the book that Zephyra must not be bad since she helps to have Sagan brought back to life for Astra.

Another mystery is the death of Astra’s mom. The book only provides small details, that she died and Astra blames herself. We don’t know how her mom died or Astra’s part in the death that could make it her fault. Towards the end, Astra does have a dream or vision about her mom, though, which allows her to have some closure and know that her mom doesn’t blame her.

I am a bit confused when it comes to Sagan and Alek. We know that they were friends on earth which is how they got stuck on Pannotia together. I kept wondering how old they are and exactly how long they’ve been on Pannotia. They were teenagers when they got transported to Pannotia, and they said they’ve been there for a few years, but time is different on Pannotia so a few years for them could be very different compared to earth. They each do have very unique personalities and character development. We learn a lot about Sagan, how he was addicted to drugs and his sister committed suicide because she was raped, but I feel like there is still more that needs explaining for him. Alek on the other hand seemed really nice to start, but then he would go back and forth between being nice and being a jerk, until he tried to rape Astra. I think that both Sagan and Alek show how much a person can change when left in a situation. Sagan has physical changes, while Alek has behavioral changes. As much as I didn’t like Alek, I still feel bad that he died at the end.

We learn that there is a connection between Vojin and the characters in the prologue, but we really don’t know much about him. He is still a complete mystery. There’s no telling how much he can be trusted.

The ending felt really abrupt with fighting Prosperine, bringing Sagan back to life, and Vojin finding Astra. I was surprised to come to the end when there’s so much left. I look forward to seeing what comes next for Astra’s adventure.

“Your species is a virus and you are the antibody fated to save both worlds.”

“Just because you were taught something, doesn’t make it true. You have to question the information that you are fed.”

“Because humans on earth would kill anything that they are not comfortable looking at or being around, no matter the innocence.”

“Just do what I do and empty your mind. Pretend like your reality is nothing more than a dream because maybe if you are lucky, one day it will be just a memory of a tough time you survived.”

“No longer did she fear death or pain but instead the deep primal urge to watch the demon’s blood seep onto the snowy ground was far greater than any urge she ever felt before.”
at March 01, 2020