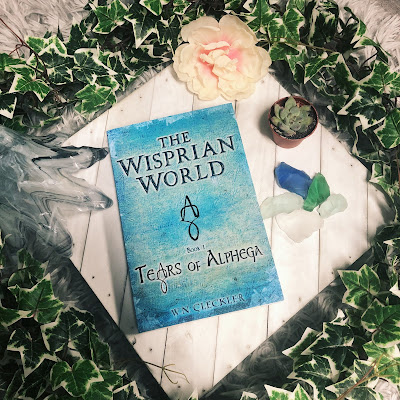 Lure has rebelled against Alphega. In his rebellion, the gate to Agapia has been destroyed, causing pieces to fall down to Wispria. These pieces of agapate fall into the hands of Wisprians, allowing each to possess a special ability. These Wisprians must join with the fallen Archeon to stop Lure.

This book is a fantastic twist on the Creation story. You’ll better pick up on references if you know about this religion, but even if you don’t it’s still an amazing story. There’s plenty of action, adventure, magic, and mystical creatures like mermaids and unicorns.

This story takes place after God, known as Alphega, has created Earth, known as Wispria at this point in time, but before the creation of Adam and who humans are today. Wisprians are similar to humans, but there are different forms of these inhabitants, such as Reflections and Sprinters. The story is told in terms of scrolls, with each scroll basically being a separate chapter. The scrolls are written from the perspective of Alphega, so they’re written in first person, but have more of a third person feel since Alphega can see everything going on and give details of all perspectives. For the most part, Alphega just tells the story, of what is happening in each place and to each person, but He will occasionally interject to give His personal feelings on what is happening.

I absolutely loved the writing style! With the story being told by Alphega, there was so much detail put into everything. However, there wasn’t too much detail that it took away from the story. Everything that happens is adequately explained as well. It’s like reading a description of a movie scene. You’re also not left wondering about things, for example at one point a character borrows something from another character, and you’re not left wondering if it’s just implied that the character returns the item, instead it’s explained that the character returns the item, but explained in a way that flows with the story.

At the end of each scroll/chapter, there is a picture of one of the scenes from that scroll/chapter. These pictures are mainly of characters, which magnificently gives you a face for the name. The details and descriptions of characters is already wonderfully done, but the pictures really allow you to envision the characters.

Additionally, there is a map of Wispria included within the first few pages of the book, as well as a colored version on the back of the book. This made it super easy to follow along as the characters traveled. I would constantly flip back to the map to see where the particular scene is taking place. This especially helped since there are several main characters, who are in different locations, and each scroll would skip around to different characters’ perspectives.

With the scrolls skipping between characters, it feels a bit confusing at first. The book is not told in a completely linear fashion, so each scroll is not necessarily in chronological order. It’s not hard to follow what is happening when though, and it becomes more clear as the stories line up.

What really makes this book five stars for me is all the emotions I felt while reading. The writing is so well done that I felt like I was there with each character, going through what they went, feeling what they felt, and feeling what Alphega felt. Without giving too much away in this spoiler-free section, the reason this first book is “Tears of Alphega” is that when the characters suffer a loss, Alphega is sad with them and drops a tear onto them. I cried during some of these moments, feeling the characters’ pain and Alphega’s sorrow.

There are supposed to be three books in “The Wisprian World” series, with the next book scheduled to be released this summer! 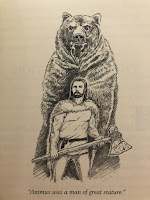 Even if you don’t know the Creation story from the Bible, or if you’re not religious, I think this story is great. However, by knowing the Creation story and having some religious knowledge, I was able to pick up on the references. God is known as Alpha and Omega, meaning the beginning and the end, which when put together makes Alphega, the name of God in this story. Additionally, God’s love is known as agape, meaning a universal, unconditional love, which inspired the stone agapate in the story. Lure is also a version of Lucifer, and I’m assuming is named as such since he “lures” people towards him.

Throughout the story there are some not as obvious connections to religion. One that I didn’t pick up on at first was that after Animus’ family died and he burned their bodies, Alphega explains that He will remember the family turned to dust and will one day use that dust to start again. I think this is referring to Adam, the first human, who was created by God from dust of the Earth. Also, I suspect that Pales’ garden may be the Garden of Eden.

Speaking of Animus, his loss hit me the hardest. Each loss that was suffered was terribly sad, but I really felt Animus’ pain. He was conflicted about going to help fight or stay with his family. You can feel his regret at not choosing to stay. But you also know that if he stayed it wouldn’t have changed anything, instead he would have died too. Other characters lost parents and a brother, which is sad, but losing children is absolutely heartbreaking. I’m glad that Oze survived with Animus, so he won’t fully be alone. I also think that Animus really showcases how you can still hold your faith even when the worst happens.

On another note, I knew that something seemed off with Reverie, but I wasn’t expecting her to actually be bad. This was the biggest shock to me. From the beginning she seemed to be hiding something. I thought that she just was selfish, and maybe skeptical of joining the group, but I was completely surprised that she was actually an Archeskotos and betrayed the group.

At the end of the book, Telle reveals that Duolos is the seventh and final person to receive a tear, but hasn’t yet. It’s mentioned that her father is the king of Lithosis, so I’m wondering if that’s who she will lose, unless there’s someone else not mentioned yet. The powers of the tears have also not been revealed yet, so I can’t wait to see how they come in to play.

“The beings and places mentioned here have been removed from the course of time. This book tells of before the Beginning and of before Adam. It tells of the old Earth, a world that was whispered - The Wisprian World.”

“I could do nothing. For, in my power, I tied My own hands, so that I would not interfere when bidden to by My compassion. I had to find out if, when given freedom to make choices, the goodness of My creation would overcome the wickedness.”

“Before long, no creature will need proof of Alphega’s existence, because they will come face to face with Alphega’s enemy, Lure.”

“Reflections were a group of beings that were created to resemble Me in appearance. They were a Reflection of My image. They were in essence like those inhabitants of the world to come, Humans - except they didn’t have the Breath, the Breath that gives Humans an immortal soul. If a Reflection or any other creature of the Wisprian World were to die, that was their end. Unlike Humans, who do have the Breath and do exist after death, whether in bliss or despair - according to the choices of their free will.”

“My perfect will was for none of My creation in Agapia or Wispria to ever perish. But My perfect will was also for liberty. I gave My creation freedom to choose their path. Unfortunately, most were not like Animus. From the beginning, Reflection and all of the other creatures of the Wisprian World sought a selfish path - this led to destruction. Likewise, in Agapia, this selfishness was fully exemplified in Lure’s rebellion. Witnessing Animus in such pain made Me wish that I had not tied my hands, and I vowed that when this first war was over, I would never tie them again.”

“Alphega forgets no one and no thing. And what the believers understand is that they can experience the blessings of Alphega in this world.”

“For My love is for all My creation, great and small, weak and strong, intelligent and simple.”

“For all it takes is the smallest light to penetrate the darkness, but when there is no light, the darkness is all-consuming.”

“Do not view yourself with too much importance, because that is itself another evil altogether, and one much more insidious. After all, Lure’s inflated self-worth is how this entire war began.”
at March 22, 2020