All the Stars And Teeth by Adalyn Grace 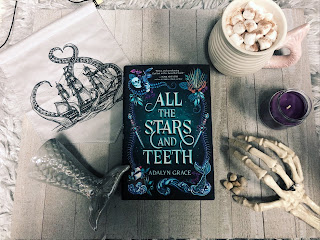 Amora Montara is next in line for the throne, but first she must put on a presentation to convince her people that she can control her magic. When her presentation doesn’t go as planned, Amora decides to go on the run with a pirate, and her soon-to-be fiancé joins them. Amora learns about trouble in the kingdom, causing her to go on a quest for a mermaid and a way to save the kingdom, hopefully redeeming herself.

This story was filled with all things great about a fantasy! Magic, pirates, mermaids, monsters, curses, and adventure!

I really enjoyed this book! There was never a dull moment, lots of action and adventure. Not to mention all the twists! I usually prefer third person writing, but I feel like this worked really well being written in first person from Amora’s perspective. It really showed what she was thinking and feeling, while also being descriptive enough.

My main criticism is that I feel like some parts could have used a bit more, and some aspects became repetitive. I feel like several aspects were only slightly mentioned, but not enough to give real meaning to the story. For example, at the beginning Amora mentions wanting to learn how to sail. She talks about it like it’s some life-long dream of hers, but it doesn’t actually come across as that important throughout the rest of the story. Other aspects are mentioned throughout, but as a repeat of what was said before. Amora will explain her magical power, but exactly the same way throughout, instead of adding to what she’s explained before.

The biggest surprises came from the couple of curses that were involved. One of the curses started to become more clear as the story went on, allowing you to guess what it is. The other curse was much more of a surprise!

I thought the ending was pretty good. There has already been announced that a second book is being written, due to release in February 2021, so the ending does leave it open for more, without complete closure. I felt like the epilogue was a bit rushed though, quickly going through what Amora is feeling after this story, and how she feels about what’s to come.

I enjoyed learning about the different types of magic within this kingdom, and, as I mentioned, enjoyed the action that took place. I’m interested to see what happens to our characters in the next book!

Let me start off with the period scene. I’ve seen that other people like this scene because books don’t usually include real-life situations, like girls’ times of the month. I understand that, but I feel like this scene wasn’t very accurate. I can see that it was included to add to the intensity of the situation, because Amora was disguised as a man, and the soldiers looking for her never would have recognized her without her getting her period. This added some action, since the group was now recognized and needed to escape. However, I don’t know how often the very start of a period gives off that much blood to be recognized. I also don’t agree with Amora just laughing about it when they start sailing away. When you bleed through your pants, it’s embarrassing. Also, her period was never mentioned again, which makes it seem like she bled once and was done. In my opinion, this is one of the aspects that needed more, I think this scene should have just not been included if nothing more was going to come of it.

As I mentioned above, the curses were the biggest surprises and twists. It’s assumed that there’s something more to how Bastian’s ship works, since it sails very fast and doesn’t seem to need much guiding. Once Vataea announces that there are several curses nearby, you can start to speculate what each one is. I figured one had to do with Bastian’s ship, but it didn’t start to be real clear until they were fighting the Lusca and Bastian appeared to feel the pain when his ship was hit. So when he explained his curse to Amora, it wasn’t a huge surprise.

The Montara blood being cursed, on the other hand, was more of a surprise. Since Vataea said there were several curses, you might guess that one of them has to do with Amora, but I never would have guessed exactly what the curse was. Having the knife of Cato reveal the curse was a unique and interesting touch. It showed Amora what happened, which is more believable than someone telling her the truth. I liked how the knife showed the story as a flashback, like being transported back in time to watch the events unfold. This part of the story was very detailed and well thought out. I’m interested to see how the kingdom will change now that the truth of this curse will be made known to everyone. I also wonder if Amora will be able to break the Montara curse.

Going back to my earlier point about the epilogue, because it was rushed, it left me feeling almost depressed with the ending. Throughout the story, I enjoyed the relationship building between Amora and Bastian, and I liked that she was wanting to make her own choices about who to be with. However, the ending made it seem like Amora doesn’t actually like Bastian all that much. I understand being cursed to someone would be tough, and I understand that it would take away some choices, but everything before the epilogue made it seem like Amora really liked Bastian, and then her thoughts explained within the epilogue seemingly go against that. I’m very interested to see what the next book holds. If their relationship will move forward, and if they will be able to break the curse binding them.

“I am Amora Montara, Princess of Visidia and heir to the High Animancer’s throne.”

“Because while this may be a demonstration of magic, it’s also an execution.”

“The beast gnaws within me, wanting to devour this soul it senses me considering.”

“The sea is a beast more fearsome than even the Lusca.
But we don’t need to rule it. We need only for it to trust us. Work with us. Be partners.”

“It might not seem like much to the others, but I’ll use their trust as my armor, and the fate of my kingdom as my strength.”

“But even our idols - even those we want to love and trust more than anything - can let us down. It’s time we accept it and face the reality they left us with.”