The Babysitter by Nancy Bush 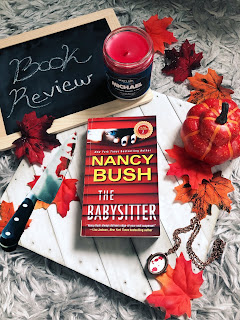 Jamie Whelan desperately wants to go to the high school party, but she has to babysit. She convinces her sister Emma to take over for her. Emma is attacked while babysitting, leaving lasting cognitive effects. 20 years later, Jamie is back in town to care for Emma and another babysitter is attacked. In a similar fashion to Emma, even at the same house. Was Emma’s attacker the suspected Babysitter Stalker? Is the new attack related to Emma’s attack?

Fans of mysteries, this is a book for you! An exciting mystery with multiple twists, making you suspect so many people!

The story is written in third person, but told from several perspectives. Mainly it’s told from the perspectives of Jamie, her daughter Harley, and Cooper, a high school friend of Emma’s who became a detective. Each perspective is written in a slightly different style. For instance, the story begins when Jamie and Emma are in high school, when Emma gets attacked, written in Jamie’s perspective. This perspective has a high school teenager feel to the style, whereas the adult Jamie perspective is styled for an adult. This gives a first person feel to the story, while also providing details that only third person writing can provide. Additionally, there are periodically short writings from the attacker’s perspective, giving you insight into what they are feeling during those particular times, without giving away who they are.

I prefer books/shows/movies that don’t tell you or show you who the killer is, so you can try to figure out the mystery alongside the characters. So I liked that the attacker’s perspective gives you hints at the motive, but doesn’t detract from the overall mystery. Throughout the story, I had several guesses of who the attacker was. There are multiple possible motives, leaving several suspects. The entire time you are drawn to the story, with a need to know who is behind the attacks!

It’s a nice touch that Cooper is a detective, and was a friend of Emma’s. This gives you some backstory into who Emma was in high school, before she was attacked, and who her friends were. It also provides police work to the mystery. Emma’s attack was never solved, so Cooper is still investigating, while also investigating current crimes.

I only have two complaints, which are very small. The first being that the little bit of romance that was included seemed to move a little too fast. The second being that the ending felt a bit too abrupt to me. Both are expanded on in my spoiler section because I don’t want to give too much away.

Even though the ending felt abrupt, there was an epilogue that helped to further explain and provide closure, which made the ending good overall.

I thoroughly enjoyed this mystery! Definitely keeps you on the edge of your seat with a thrill the whole time!

I liked the romance between Jamie and Cooper, but I felt like it was a bit too fast. Jamie has had a crush on Cooper since she was younger, which is why she wanted to attend the party the night her sister was attacked, so it makes sense for her to still have a crush on him and want to finally act on it. But Cooper was conflicted with his feelings. He describes really liking Emma and being hung up on her because she wasn’t interested in keeping a relationship with him, and then she got attacked. He goes on to describe that part of his attraction to Marissa’s mom and reason for marrying her was that she looked similar to Emma. Also, everyone says Jamie looks just like Emma, so part of his attraction to her is that she reminds him of Emma. It’s never said if he overcomes his confliction and likes Jamie for Jamie, or pursues a relationship with her to fulfill his desire to have ended up with Emma. Their relationship seems sincere and real, and seems good for each of them, but it was a bit rushed and makes you wonder if things end up as a happily ever after for them.

Even with the epilogue, the ending was very abrupt. It felt like “here’s the killer, the end.” For some of the book, I suspected Teddy was the attacker because Emma said she didn’t like the Ryerson twins, and he seemed a little suspicious. I never considered Serena until the very end, when Gwen’s parents insisted the “S” on the note was Gwen’s handwriting but the rest wasn’t, and Betty insisted her attacker was a woman. Right after realizing it must be Serena, she comes clean to Teddy and Jamie, then attacks them, then it’s over. The struggle between Serena, Teddy, and Jamie was very short, ending quickly and going right into the epilogue. The epilogue did provide enough explanation and closure, though. The abruptness just left me hung up on the book for a while. It was hard to get into another book because I wasn’t quite over this one.
at June 30, 2020