To Sleep In A Sea Of Stars by Christopher Paolini 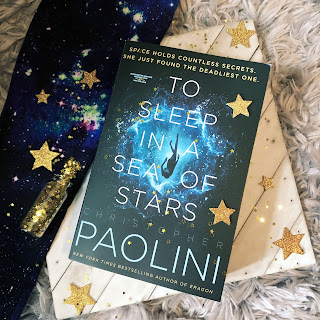 Several hundred years in the future, humankind has expanded into space. Humans can now travel much farther than ever before and have built colonies across other planets in other systems. Kira Navárez, a xenobiologist, goes out to perform a routine inspection while her team is researching on a new planet for potential colonization. What Kira finds changes her life... Next thing she knows, humankind as she knows it is at risk from aliens, and she must use what she found to save the galaxy.

I’m typically not the biggest fan of sci-fi, especially when it takes place in space, but I absolutely loved this book! There’s action, adventure, mystery, aliens, new planets, a misfit team trying to save the universe, literally.

Christopher Paolini is a pure writing genius! His Inheritance Cycle is one of my all time favorites. To Sleep In A Sea Of Stars is a complete opposite story, but still shows how amazing Christopher Paolini is at creating a whole world. Everything is so thought out and explained. He can get really technical in some parts, especially when they’re talking about the ships and how they operate, which sometimes loses me, but you can tell that Christopher Paolini did his research. Not everything about being in space is completely made up, you’d think he worked for NASA. The way this story was written, with all the detail, makes it seem like it’s all actually possible.

Not only is each character unique, but each alien character is also unique. No one is bland or dull, each person (human or alien) has been very thought out with complete backstories and certain characteristics. Everyone that Kira meets is different in some way, each grown up differently, some even from different planets and systems.

The only bad thing about this book is how long it is, nearly 900 pages. But that’s also a good thing. It means that the story is well built with a lot of action, and no cliff hanger ending making you wait for another book. The very beginning was a little slow, which can be expected since the context and background of the story were being explained. Once the action started, though, it didn’t stop. There wasn’t a boring moment!

The ending was really good. It was good enough to leave you feeling content about how the story ends, and has closure. It's good to where another book is not needed, but also leaves the story open to where there is the possibility of the story continuing, similar to The Inheritance Cycle.

As I mentioned, sci-fi space stories are usually not my favorite, but I thoroughly enjoyed learning about the technicals of space travel and living in space in this book. I’m still not too keen on traveling into space, but this story piques my interest of adventure into space and what could possibly be discovered. If you enjoy space, then you’ll love this book. But even if you don’t like space, I’m sure you’ll still enjoy the adventure.

Another thing I like, just as with The Inheritance Cycle, in the back of the book there’s an appendix. The appendix lists terms used throughout the book with their definitions. There’s also more detailed explanations on how the spaceships operate and travel. Additionally, throughout the book there are some images of the planets and stars within the systems that that part takes place.

As a warning, this book is adult, unlike The Inheritance Cycle. Even then it’s not as adult as some adult books. The main “adultness” is the language. So if you want to stay away from swear words, especially the F word, then beware. Otherwise the book could be considered more young adult.

Since Eragon was made into a movie, I really hope that this one will be too. Maybe a Netflix original tv series!

I received my copy from BookishFirst. I cashed in my points for it. So thank you BookishFirst for getting me an early copy!

From the start I knew something big has to happen. It’s very rare that the main character starts out with a significant other, so I knew something must be up since Kira was in a relationship. I definitely feel bad that some of her teammates died, especially Alan, but obviously the story wouldn’t be the same if Alan lived. I also really like Falconi, even if Kira were to not live happily ever after with him. He’s probably one of my favorite characters. He starts out seeming really hard and strict, but then as the story progresses and Kira becomes closer to him, he softens up. He makes a really good captain and his team meshes really well.

The team of the Wallfish is definitely made up of misfits, but misfits who fit together. I loved learning about each team member. They have really good chemistry, the story wouldn't be the same without them. I think that because of how misfit they were, and their past experiences, they accepted Kira.

Not only was there war between one alien species, but also with a second alien species. I loved that it wasn’t just a fight against aliens. There was actually a rebel alien group that they needed to join forces with against another type of alien. This again shows how amazing Christopher Paolini is at creating worlds. I could feel Kira’s pain and guilt that the second set of aliens were her fault. Though, she couldn’t have known that’s what was going to happen, especially since she hadn’t been attached to the Soft Blade for very long and hadn’t figured out much about it yet, so I wouldn’t hold it against her.

The ending was kind of strange, but I really wouldn't have expected anything less. I love that Kira was able to fix the Maw by just forgiving them. I wish she had a happier ending, by maybe joining the crew of the Wallfish, but after everything Kira had experienced, it was a good ending for her. She was a good fit for the Soft Blade, later known as the Seed. Using the Seed to create the space station Unity as a place for peace between all species was a perfect way for Kira to use the Seed for good.

The only cliffhanger is that Kira went off to search for the Seeker and the rest of the "nightmares". You aren't told that she finds them and stops them, so this is where there is an opening for another book in the future. However, I love that it ends with the Wallfish sending a message to Kira to let her know that her family is still alive. It not only lets you know that her family is okay, but that the crew of the Wallfish is okay as well. It also shows that it is possible for the Wallfish to find Kira and meet up with her, so it leaves open the possibility of them joining forces again in the future.

“The path to our goal is rarely straight. It tends to turn and twist, which makes the journey far more enjoyable than it would be otherwise.”

“How did any of us get here? Hmm? And is it even that  important? One could argue that all that really matters is that we learn to deal with where we are at any given moment, not where we were.”

“We are made from the dust of dead stars.”

“We’re off to parts unknown to tweak the nose of fate.”

“She’s the fury of the stars.”

“Take comfort, then, that whatever you choose in life has importance beyond yourself. Importance, even, on a cosmic scale.”

“When air, food, and shelter are assured, only two things matter. Work and companionship. To be alone and without purpose is to be the living dead.”

And wait and here to sleep -

To sleep in a sea of stars."