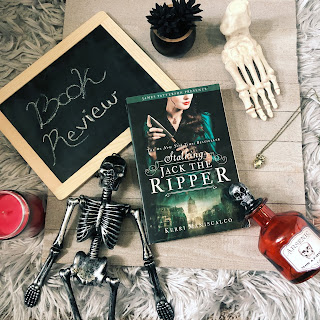 ⭐️⭐️
It's the 1800s, in London, and Jack the Ripper is on the loose murdering women in the dead of night. Audrey Rose is not like the other girls, she enjoys apprenticing under her uncle, a medical examiner. Sneaking out because her family doesn't approve, Audrey Rose will do whatever it takes to solve the mystery of who Jack the Ripper is, even if that means he's someone she loves...

This book sounded so good. I've heard really good things about the series, and one of the reviews on the book says it's a murder mystery with a bit of romance. However, this is misleading and I was disappointed. I feel like the story had a lot of potential, but it's more of an 1800s romance novel, with a bit of murder mystery. Which there is nothing wrong with. I loved the show Jane the Virgin and loved the book based on the one she wrote in the show, Snow Falling, which is a 1900s romance novel. However, with Snow Falling, I knew I was going to be reading a romance with a bit of mystery.
I was really drawn in with the first couple of chapters. It starts out describing how Audrey Rose wants to be a medical examiner, and is very in depth of her helping her uncle examine a body. As a note, this book does get graphic in a gory way in describing the murders and examining the bodies. I loved this aspect, my favorite shows are crime shows, so of course I was sucked in and thought the story would be great.

After the first couple chapters, though, the story levels out. It still has some of the gory, crime aspects with the murders, but it starts to more focus on Audrey Rose and the romance than the crime solving. This was not really what I was expecting from the description of the book and not really the story I was looking for. I was really wanting something spooky/creepy, and there was a little bit of this, but not much.

This book is written in first person, from Audrey Rose's perspective. As I mentioned in the plot description, Audrey Rose is not like the other girls, and she doesn't let up reminding us of that. I'm all for a girl who isn't all girly and isn't like normal girls, but I felt like Audrey Rose repeated this statement so often that she was more convincing herself than the reader. This is when I don't like first person perspectives. She preferred to be cutting open bodies with her uncle instead of attending tea parties with her aunt and cousin, but she did enjoy wearing makeup and being fashionable. She doesn't do everything that normal girls do and she wants to have a job that was seen as only for men at the time, so in that aspect she isn't "like normal girls". It just was repeated so often to the point that it became annoying, especially since she isn't super different from normal girls.

Without giving away the ending, I'll go into more detail in my spoiler section, but it felt anticlimactic. I almost DNF’d the book about halfway through because it was going way too slow for me, but I pushed through mainly because I wanted to know who the killer was. I had my suspicions and wanted to know if I was right. As the ending came, I felt hopeful for a good end with some action. There was a little bit of action, but it honestly was a let down again. Not as much happened as I thought would. Then the very end felt a bit rushed and didn't seem very realistic. Again, I'll go into more detail about this in my next section.

One of the things that I did like was the formatting of the book. Each chapter is titled with the date and location of the setting for that chapter. This helps you to follow along with the timeline and keep track of where events are taking place. Additionally, there are occasionally pictures included at the start/end of chapters that are mainly real pictures, giving a real representation of the basis of this story.

As I mentioned, I've heard that the next books in the series are even better. Eventually I'll probably read the next books since they contain the same characters and I'm kind of interested to see what comes of them. However, I'm in no hurry to continue the series. I may have enjoyed the book more, too, if I had known what to expect beforehand. So, if you are wanting a creepy, thriller, this is not the book for you. If you are wanting something like an 1800s romance novel with a little bit of thrill and mystery, then this is the book for you.

As said earlier, I got really sucked in at the beginning. I loved the idea that Audrey Rose dressed up as a boy to attend her Uncle's class, and snuck out of the house to examine bodies with him. The book starts with her plunging her hands into a body. I was really intrigued to see how this continued. However, due to having trouble evading her father, Audrey Rose quit attending her uncle's classes. I would have liked to hear about more than one class session.

After the first couple of chapters, I thought the book was going to include a lot more about Audrey Rose attending the classes and her work with her uncle. The mystery was good, but not quite what I was wanting or expecting and was super slow. Also, Audrey Rose described going through her uncle's notes about the murders to find clues, but none of those notes were actually said for the reader. What I enjoy most out of mysteries, whether it's a tv show or a book, is getting the same information that the characters are so I can follow along and try solving the mystery on my own. But you don't really get that with this book.

As for the mystery, I was a little surprised that Audrey Rose's brother Nathaniel ended up being Jack the Ripper. My first suspicion was Thomas. Then the clues started to point towards Audrey Rose's father, but I didn't think it was him, rather someone trying to frame him. Once you find out that it is her brother, it makes sense. Especially once Audrey Rose finds his lair and the reasoning behind his actions.

When she found Nathaniel's lair, I was really expecting some sort of action. I thought that maybe Thomas would come bursting in to save Audrey Rose, and there would be a struggle. However, again I was disappointed. Their father came in, and just tried to talk Nathaniel out of it. I understand he was family, so they didn't want to turn him in to the police or even hurt him, but I feel like they could have done a bit more.

Finally, the book ends with Audrey Rose's father accepting her desire to be a medical examiner and saying he's sending her off to some prestigious school to study, and that Thomas would be attending with her. This just felt really unrealistic to me. It didn't fit with her father's attitude the entirety of the book. Her father wanted so badly for her to be a proper lady and not be interested in a man's job. Additionally, Audrey Rose's father had a falling out with his brother, adding to why he didn't want Audrey Rose apprenticing under her uncle. So this felt like he was suddenly forgiving his brother and suddenly accepting Audrey Rose's wish to be a medical examiner. Furthermore, her father had arranged for her to court the police officer Superintendent Blackburn and wasn't fond of Thomas. So again, it's like he was suddenly accepting Audrey Rose's choice of being with Thomas. Audrey Rose says that Thomas must have won over her father, but there is no explanation of how. These are all good things and make for a good ending to lead into the next books, I just think there should have been a bit more explanation between Audrey Rose and her father to make this feel more realistic.
Favorite Quotes
"Death was not prejudiced by mortal things such as station or gender. It came for kings and queens and prostitutes alike, often leaving the living with regrets. What might we have done differently if we'd known the end was so near?"
"Roses have both petals and thorns, my dark flower. You needn't believe something weak because it appears delicate. Show the world your bravery."
"One needn't be strong in only physical matters - a strong mind and will were fierce to behold as well."
"Diamonds were everything I hoped to be; beautiful, yet containing unimaginable strength."
"Without humans and nature, there's no such thing as science."
"Seeing the truth was never easy, especially when it revealed those closest to us could be monsters hidden in plain sight."
at October 17, 2020