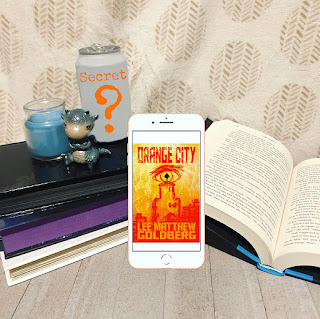 “Do you ever feel like you’re not in complete control of your brain?”

The outcasts don’t fit in in the Outside World: the criminals, the deformed. Those who are lucky are Selected to come to The City, ruled by The Man. They are provided a job and a home, a chance to start over. The catch? They can never leave The City, and they must obey The Man or suffer the consequences of being sent to an Empty Zone.

Graham Weatherend is one of those lucky ones. Orphaned at a young age, with bad experiences in the foster system, reduced to a life of crime. Instead of going to prison, he is Selected and brought to The City to work in an advertising agency. After 10 years, his story really begins when he is asked to try out the new products from Pow! Soda company, and help run their advertising campaign. However, the new sodas aren’t as good as they appear, and Graham starts to uncover the truth about The City.

I really enjoyed the mysteries of this new world. It was somewhat hard to get into at first, though. There are a lot of terms that aren’t defined, such as “Selected” and “Empty Zones” that I used in the summary of the book. Since these terms aren’t defined, you’re left to use the context to figure out what they mean, which is difficult at first and makes it hard to fully understand what’s happening. But as the story continues, it’s easier to understand these terms and the world-building.

Even though the story is a little hard to follow from the beginning, using these terms from the start without definitions flows really well. It puts you right into what’s happening and the time period when all these terms are common language.

Goldberg did an amazing job creating this dystopia of America. What makes this story so terrifying is that it’s possible. I don’t know if advancements like “lifelike limbs” where you just plug them into a socket on your body will truly be developed, but the concepts are definitely plausible.

The City seems like a wonderful place, where you can start over. Forget your past, become someone completely new. However, inhabitants aren’t as free as they think. They may have escaped the normal world, known as the Outside World, but now they are under the control of The Man. There are always questions about how much the government controls us, mainly without our knowledge. So The Man’s control isn’t that unlikely.

I thought it was really interesting that this control is being implemented with a soft drink. We know from the beginning that The Man has plans for Graham, but we don’t know exactly what those plans are until he is chosen to test the new Pow! sodas. But even then we don’t know why Graham and the reasoning behind his testing the sodas.

There’s a lot of mystery behind these reasons. It was fun to try to figure out the effect each flavor of Pow! was having on Graham and who was in on his experience. These mysteries are revealed at the end, but new mysteries are brought up. The ending is also a little bit of a cliffhanger, so you’re left eagerly waiting for the next book Lemonworld.

Thank you to Black Thorn Book Tours for a copy of this book!

The biggest twist was finding out the reasoning behind Graham being chosen by The Man. Warton, Mind, and Donovan reveal that there was an uprising before, and Graham’s parents were major leaders in it. They were able to escape back to the Outside World, but The Man found them and their son. When Graham starts dreaming about his parents’ death in the car crash, something starts to seem off about it. So you’re able to guess that it didn’t actually happen that way. We find out that The Man killed Graham’s parents and had that memory of the car crash inserted into his mind. We also can infer that it was the Elders who inserted the chip into Graham’s brain, altering his memories, since Graham had the memory of twins inserting the chip, and E asks the Elder who attacks them at the end where his twin is.

Speaking of E, I loved how there was some redemption for each of the main characters. Gayle decides to help take down The Man. E gives his life to save Graham and help stop The Man. And of course Graham redeems himself by taking action. I think he would have made his parents proud.

However, at the very end, Graham finds a new flavor of Pow! on the boat they’re escaping on. This leaves you wondering if Warton, Mind, and Donovan are actually good, or someone found out their plan of letting Graham leave and seized the opportunity.

We’re also left wondering who The Management is, and what their overall plan is. With the technology advancements of this world, I’m not convinced that The Man is forever dead. I feel like he could be brought back to life. But even if he isn’t, there are still others like him out there, and someone in charge of them. This is what I’m most interested about in continuing the series. Graham started a revolution, but then fled, so I wonder if he will continue to find out who’s behind this, or if someone else will continue what he started.

“The world breaks everyone and afterward many are strong at the broken places.”   -Ernest Hemingway, A Farewell to Arms

“Rise from the ashes...There are a few key moments in life, and this is one of them. Today is your four-leaf clover.”