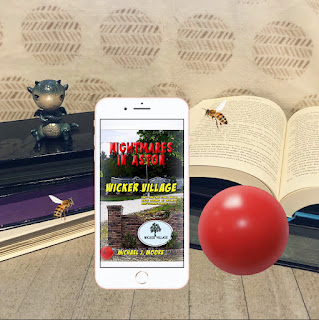 11 year old Juanito and his family just moved to Wicker Village in Aston, Washington. A trailer park in a small town. Moving from a big house in the big city of Seattle. Moving can be a huge struggle on its own, but even harder when the boogeyman gets involved.

This story is full of the typical thriller aspects: an old cemetery, an old asylum, supernatural encounters, and the suspicion of a murder that was never solved.

I would classify this as a contemporary, middle grade thriller. It felt like a mash up of Goosebumps and something like the Conjuring. Even though this story is intended for readers aged 8 to 12 years old, I still really enjoyed it as an adult. It’s great for younger readers, written in a way to easily understand, and is scary enough to be a thriller, but not so scary that younger readers would have nightmares. It’s good for older readers as well who want something that’s an easy, quick read, that still gives you chills.

A week after Juanito and his family have moved into Wicker Village, Juanito starts to have some supernatural experiences. First he sees a swarm of bees in the shape of a man, then he hears someone inside his home, then we watches a YouTube video where the man starts speaking directly to him, and then the video disappears and has no evidence of ever existing. Juanito begins to make friends with other kids who live in Wicker Village, and while hanging out, they have an experience together.

I also love the mystery aspect of this story when Juanito and his friends try to figure out what’s happening and why.

My only complaint is that this book seemed too short. It starts off exciting, drawing you in, with Juanito’s first experience in the first chapter. But then the story slows down, building up the setting, background, and other kids involved. It’s not until about halfway that things start to pick up again, and three quarters through when the mystery is really introduced. After that, all the events felt rushed, and the ending felt a bit abrupt. I would have liked to have more details towards the end, however, this fast pace makes this story easier for the intended readers. Also, some of the twists/mysteries are easily guessed, but again this could just be the fact that I’m an older reader.

Overall, I think this is an excellent book for middle grade readers who want something spooky!

Thank you to Blackberry Book Tours for a copy of this book!

Once the kids figure out that Sarah had a boyfriend named Jack, and the reason she started haunting Juanito is because he looks like Jack, you start to wonder if Jack is currently living in Wicker Village. Then you can guess that he’s Old Man Whittaker. It’s sad that Sarah was killed, but at least her and Jack were able to see each other again, giving both of them some closure.

My main issue with the ending feeling abrupt is that Juanito says he’ll wait a while then call the police to explain what happened. I’d like to know comes of this, because I’m assuming the police would take Sarah’s remains to examine them and make sure it’s her. I wonder if this would upset her again and cause her to do more haunting, because the whole reason she’s haunting in the first place is she would like for her body to be laid to rest near her father. But I’m sure that once the police check it out, they’ll probably bury her in the cemetery. The ending was pretty good, I just would have liked to know what happens next.