The Legacy of Old Gran Parks by Isobel Blackthorn 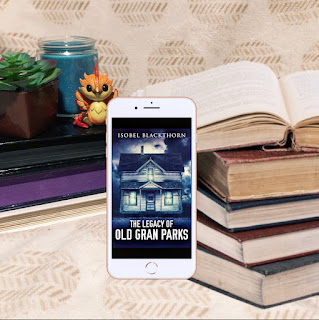 “Taking in the crossroads, the neon sign outside the roadhouse, the hotel across the highway, the general store on the other side, it all looked normal, like an uneventful kind of place. Only, it was far from it.”

The paths of four women cross in Cann River, Australia, 1983: Miriam, a longtime office worker forced to stay in town on her way to a new house because her car breaks down; Frankie, a local hunter who lives in an isolated cabin in the woods; Pearl, a local fisherwoman who lives next to the lake; and Emily, a backpacker from England working at the local roadhouse café to save money to move on. But only the locals understand the legacy over the small town left by Gran Parks when she killed her abusive husband about 30 years prior. After each of the women encounter reprehensible men, the effect of Gran Parks’s legacy starts to take its toll.

I really enjoyed the thrill of this book, however, I felt like the personalities of the women were lacking in their storytelling. The story is told in first person from the perspectives of the four different women. The perspective switches each chapter, with the woman’s name as the title, going in a cycle of Miriam, Frankie, Pearl, then Emily.

I like the change in perspectives, but I wish each perspective had more of her own “voice”. The writing style and word choice is the exact same throughout, and even though the women have some similarities, they are different, with different educations and backgrounds, so I feel like each one should have a different style in the writing, especially since it’s written fully in first person.

I do like the first person, though. It gives you more insight into each woman, as well as giving some outside account when the women encounter each other. Since they’re not together very often, and they each have different experiences, then the first person account lets you know what’s happening to each one.

The book starts off really good and thrilling. Gran Parks kills her husband, with a meat cleaver. He was abusive, and she did it out of self defense. This sets the stage of her legacy, hinting at what’s to come.

Each woman has an encounter with a man who seems to be trouble: a drug addict staying in the hotel room next to Miriam, a man on the run convicted of rape and murder, a man with two daughters who is staying in a house next to Pearl seemingly without the owner knowing, and a man staying at the local lighthouse while the lighthouse keeper is out of town.

There’s some mystery to each man. As the women unravel this mystery, the thrill of Gran Parks’s legacy takes hold.

The whole time you’re wondering what’s the secret to each of these men, and how will the legacy influence how the women handle these men.

This book wasn’t really scary, but was definitely creepy, thrilling, and entertaining!

Thank you to Blackthorn Book Tours for a copy of this book!

I could tell from the beginning that this story had some similarities to Fried Green Tomatoes. You have women coming together to help each other get rid of bad men. Then there’s Frankie, disposing of one of the men by giving his “meat” to the roadhouse to be used for burgers.

I understand why the women do what they do, but there’s the question of if it was actually necessary. The man Frankie encounters is almost certainly Wayne, a rapist and murderer, confirmed by the similarities of his description and the picture of him in the newspaper, as well as the fact that he goes to Frankie’s house after she sets the trap of saying her good looking sister is in town and all alone at her house. It’s also certain that Dan, the man staying in the hotel room next to Miriam, is not good. Miriam found his stash of drugs, and Cassie, who ran the hotel, knew of his past. However, it’s not completely certain that Brent and Pete are bad.

Pete seems good at first, but then does seem to have an ulterior motive. Emily is naive to this motive, up until Pete comes at her with tools in his belt. Once Emily finds the magazine hidden in the couch and reads the article about a study where mice with brain cancer were cured after eating the brains of healthy mice, you guess that that is Pete’s plan for Emily. So he might not be as good as he seemed.

Brent, on the other hand, is still questionable. Instead of Pearl confronting him and telling him that she talked to the owner of the house and he needs to leave, she decided to poison him to get rid of him. After killing him she talked to his daughters to find out their story. Then she assumes Brent killed their mother. We, the readers, aren’t told exactly what the girls say, so we can’t decide on our own if Pearl is assuming correctly or if she’s just reading into what the girls say. Even though I don’t condone killing, Brent’s murder is only one that doesn’t seem completely justified.

The ending is the most thrilling part of this book. So far nothing has been done about Dan, and Miriam hasn’t had any part in the killings. But as she’s driving off, she hits something, possibly someone. We can guess that this someone is Dan, if Gran Parks’s legacy holds true. And we can assume it does, since as Miriam glances in the rear view mirror, she sees a woman sitting in the passenger seat of the truck behind her, but at second glance the woman is gone, indicating the woman was Gran Parks. Making sure her legacy continues on.

“Justice has a way of landing the right way in the end.”

“Men took out their rage on women with impunity, and somewhere along the line there had to be some redress. It was the wisdom of Gran Parks.”