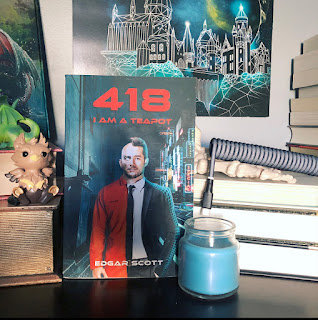 In this futuristic dystopian, menial jobs are completed by staff. Staff are people who either by choice, birth, or punishment have their brains integrated online, so their minds can participate in a virtual world with their alternate identities and lives while their bodies are controlled to perform these lowly tasks. But after a car accident, known as an exception, one staff becomes aware of what his body does while his mind is immersed in his virtual life.

I think this story really makes you stop and think about society’s use of technology and how we treat others, especially those in a lower-end job than you. The people who are “staff” can be born into it because their parents are staff, or they could be people who chose to live a life where they are fully immersed online while allowing the use of their bodies for whatever jobs are necessary, or they could be carrying out a punishment of either being a criminal or having to pay off their debt. Those that are staff do not have an identity, referred only to the identification number they are given. Their gender isn’t even recognized, they are referred to as “it”.

There are two main characters in this story: George, a staff known as 418, and Brian Agarwal, who owns a staffing company that 418 is a part of. The book is written in a mix of first person and third person. The first person is from George’s perspective, which gives insight into what he’s going through and feeling as he becomes aware of his situation as a staff and what he wants to do about it. The third person is mostly from the perspective of Brian, to show what he experiences, especially with regards to 418, while also giving others’ perspectives, like insurance agents handling 418’s case.

I especially loved the first person of George’s perspective. Once he becomes aware, his mind isn’t online in the virtual world while his body is controlled for work. This really enhances how someone doing this type of job may feel, and how they are treated by customers, but how they can’t do anything about it. George has a lot of feelings about his situation and things he wishes he could say to customers, but his body and his speech is controlled by what he’s programmed to do so that the customer is happy.

It’s scary to think that some people would choose the life of the staff. Brian even fears that his son will choose that life with how much he enjoys his virtual games. But it’s really not that far fetched of an issue. Just to see how far technology has already come, and how so many people rely on it and can’t give it up.

I just wish there was a bit more detail and world-building for the world that this story takes place in. We get a taste of it with things that the characters experience, but I would have enjoyed more background. For instance, how do staff reproduce? Their interactions with other staff are solely online in the virtual world, and they can get married and have children in their virtual world, which then corresponds to a birth in the real world, a child born into the life of a staff. However, it’s never explained where these people born into the life come from.

I thoroughly enjoyed the relationship formed between George and Brian, and how they each helped the other come to a realization about their life.

Thank you to the author and Bookstagrammers.com for a copy of this book!

You can purchase the book here:

One thing that bothered me was when Brian got in trouble for not paying off a loan that he supposedly took out, I don’t know if Brian wasn’t thinking, or what, but we know that there are bank accounts in this world, so there should be a record of deposits Brian has had. Therefore, he should have brought in his bank statements to show that he never received the loan money if he didn’t actually authorize it. However, I think the author was just trying to make a point of how unfair the system could be, so even if Brian brought in bank statements, that might not have changed anything. This also shows what some people may resort to in order to get money, to keep his family from becoming staff, Brian has to sell a kidney.

I’m also a little confused on how George was able to get free from retirement. But I’m guessing it was something like with Sirius Black in Harry Potter. Sirius was able to escape from Azkaban Prison by transforming into his dog form, then the dementors didn’t detect him, so he was able to slip right past him. I think similarly, since George’s implant was turned off, and he stopped using the feed bags, with whatever drugs were in it, he basically wasn’t staff anymore. He wasn’t reacting the way staff usually act when sent to retirement. He really stopped acting like a staff after his exception. Therefore, the staff who were guards didn’t recognize George as a staff, and didn’t try to stop him as he walked out.

“This isn’t life, this is existence.”

“Nothing disguises lies better than the truth.”

“No one can make you accept a fate that you didn’t choose.”