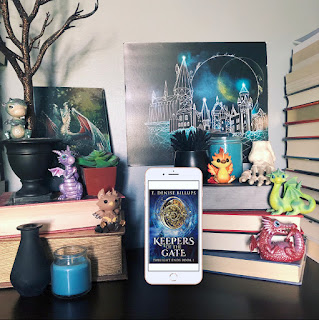 In 1779, a Seneca village is destroyed by Sullivan’s Expedition. Two hundred years later, the land houses Twilight Ends Bed and Breakfast, an inn that has been in the family for generations, generations who descended from those in the Seneca village. After the death of Tessa, her daughter Skylar and granddaughter Twyla take over the inn. But there’s more to Twilight Ends than meets the eye. The ghosts of people who lived on the land previously are just the beginning of the secret that Twyla discovers.

There is a slow start to this book, not really picking up until about halfway through. It’s not action packed or a thriller. Instead it more keeps you on the edge of your seat with suspense as the mysteries of Twilight Ends unfold. The author plans on making this a trilogy, so the purpose of this first book seems to be to set the stage with world-building and unraveling the mysteries that will contribute to the next adventures. It ends on a cliffhanger, with the suspense building, so I can’t wait for the next book to see what happens!

I love that the beginning of the book includes maps of the land that the story takes place, as well as a list of characters and their relations. There aren’t a too many characters in this story, but it does get a little confusing trying to remember everyone, especially the characters from past events.

E. Denise Billups really did her research in finding the history that serves as the backbone to her story. I also enjoyed her writing style. There’s so much detail in each sentence that I can completely picture what’s happening. The story is told in third person, with the perspective changing between main characters, letting you know what each one is experiencing.

Ultimately, I can’t wait to learn more about the past events, and see what they bring for the future.

Thank you to Blackthorn Book Tours for a copy of this book!

The main thing with this story is time travel! At first I thought that the characters just saw ghosts from the past and had visions of past events. But I love the concept of time travel. I would love to know more about Tessa’s adventures when she travelled back to be Jawanda. However, I’m excited to hear about the adventure that Twyla and Cristal have started on. I wonder if they’ll continue going back in time to different events, and I wonder if they’ll end up changing the course of history.

There’s so much left open: will they stop Harrison Dox from trying to take Twilight Ends, will the past of what William Dox did repeat itself in Harrison Dox, will Twyla save Teka’s baby, and who is the baby that Garrentha gave birth to but let Mercy and Mingin raise?

“Your sleeping soul walks with ghosts.”

“When the right people, stars and time align, history reappears around Twilight.”

“There are two wolves inside us. One is evil, the other good. The wolf that wins is the one you feed. That’s an old Cherokee proverb. The struggle between good and evil, light and darkness, war and peace are eternal. Often, men feed the evil wolf – war.”