The Cuts That Cure by Arthur Herbert 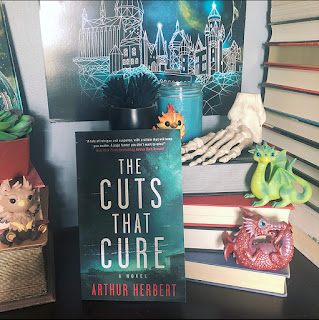 Alex Brantley is a surgeon who hasn’t been happy as a doctor since medical school. After a breakdown, he opts for a fresh start as a high school science teacher. This is where his path crosses with Henry Wallis, a seemingly normal high school boy on the cross country team. But Henry has been containing his sadistic tendencies. Henry finally decides to act on those tendencies, starting a chain of events that could alter not only his life, but also Alex’s, depending on the choice each character makes.

This was a suspenseful story, keeping you wondering what’s going to happen next, however, it wasn’t what I was expecting. The cover has a quote from another author stating, “A tale of intrigue and suspense, with a villain that will keep you awake. A page-turner you don’t want to miss.” Some readers may feel this way, but unfortunately I did not.

At first, when Henry’s sadistic compulsions are brought up, and you see what’s going through his head, this story seems like it’s going to be something from a Criminal Minds episode. I just expected more than one murder and expected Henry to be more ruthless than he was.

That said, I feel like if the story was solely focused on Alex, and he was the single main character, with the synopsis reflecting that, I wouldn’t have been as disappointed. I’ve read other mystery/thrillers, with a villain that actually keeps you up at night because you’re scared they’re going to get away with it and come after you. Now it is scary to think that there are people like Henry who appear completely normal on the outside but have the capacity to commit cold-blooded murder, Henry just wasn’t a terrifying killer.

What became more intriguing and suspenseful was how Alex gets wrapped up into Henry’s crime, and must make a decision to commit a crime of his own in order to save himself and get his fresh start.

Probably my biggest issue was how easily Henry was caught for his murder. He only committed one murder, and had so much against him, and it wasn’t even that he made mistakes. There just so happens to be a virus on his phone that makes it look like it shuts off but it actually doesn’t, and then a kid flys a drone that just happens to fly over the murder site at the exact second that Henry’s hood falls down? Of course the author wanted Henry to get caught in order to further the story, mainly Alex’s story, but it just didn’t feel all that realistic to have that many strange coincidences. Also as I mentioned, I was surprised that Henry only committed one murder. I was expecting at least a few. I think I would have enjoyed the story more if Henry had gotten away with his first murder and committed a couple more (even though I obviously don’t want to see people die) before getting caught.

I enjoyed how things ended for Alex, though. He truly got the new life that he wanted. Marco definitely deserved something, but I don’t know about having his arms and legs amputated. I at least like that Alex starts visiting Marco, it slightly makes up for what he did.