The Dark Chorus by Ashley Meggitt 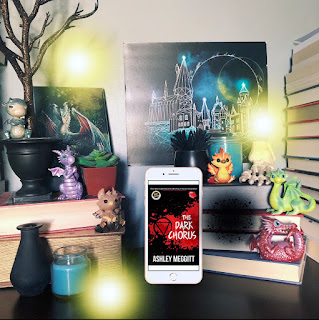 There is a boy who can see souls that have not moved on when their bodies have. These souls are known as the Dark Chorus. But there are two souls in particular the boy must help: his mother’s and the angel’s that is inside him. With the help of two other troubled teenagers, one filled with rage and the other with pain, the boy sets out to take the souls of the corrupt. Will he cleanse the angel’s soul, help his mother’s soul to move on, or get caught by the Inspector and the psychiatrist Dr. Rhodes?

This was such a quick read for me, will all that was happening I couldn’t put the book down! There’s so much mystery and adventure.

At one point, the Inspecter says, “Do you get the feeling we’re in some kind of B-movie?” I think this really sums up what kind of story this is, in a good way! If you enjoy those B-movies, especially the horror or occult ones, you’ll love this book.

Ashley Meggitt is super descriptive throughout, allowing you to really picture what is going on. Also, coming up with the religion of Banuism was perfect. It was so intricate and framed the story so well.

I love the character of the boy. He seems so innocent. His name is never mentioned, which makes you wonder if he was never actually given one, especially since he was taken from his mom when he was born and then she died. But him being nameless also seems to serve a purpose, that he’s just a conduit for the bigger plans.

It’s interesting to see how each character develops over the course of the story. Not just the boy, who is finally getting out into the world and learning a lot, but his friends, and also Dr. Eve Rhodes.

I feel like the ending leaves the story open for more. This could be an end, with the reader able to imagine what comes next for our characters, but I could definitely see another book with their adventures continuing, and I would love that!

One of the biggest reveals in this story is that the boy is the great-great-grandson of Charles Janenssen. This makes you wonder, was he descended from Charles on his mother’s or his father’s side. We know his mother had mental health issues, enough to be placed in an asylum. However, we don’t know what those mental health issues were, which could be that she had the same abilities as her son, and we also don’t know who the boy’s father is. This is one question that I feel like could have a larger role in this story, especially if another book is written.

Along these lines, I wonder if Dr. Eve Rhodes is related to the boy, or at least to Charles Janenssen. It could just be a coincidence that she also has the ability of seeing souls. Eve’s experience leads us to believe that this ability is more common than we think, but most people shut out the ability as they get older, just like Eve.

“Each of us carries within us our own portal to death, our own gateway.”

“Although I see the dark, I live in the light, the light generated by beauty.”

“That whatever anyone ’as done, they deserve the chance of redemption.”