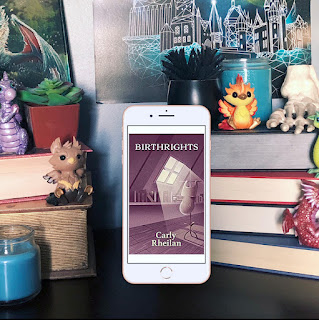 Dr. Ana Griffin is a psychiatrist. One night after giving a lecture, she’s attacked in the parking lot by one of her patients. He stabs her in her pregnant belly. But there is no blood. Ana isn’t really pregnant, instead she’s wearing a pad. However, another one of her patients witnesses this attack. Now Ana’s secret is in jeopardy.

This is a psychological thriller of what a woman will do to have a baby. There are more secrets than you realize to Ana, but the lengths she will go to keep those secrets is thrilling.

There are so many mysteries to Ana, not just her pregnancy but also a traumatic event in her childhood involving her baby brother. I was on the edge of my seat waiting for the mysteries to unravel.

The book has a slow start, getting into who Ana is, revealing pieces of her mysterious past, and then explaining her journey to become “pregnant”. Once we’re given the full story behind her pregnancy, things start to pick up, because this is when Ana’s secrets are threatened.

Other than the thriller aspect, I enjoyed how mental illness and the troubles of becoming pregnant were implemented into the story. The patient who stabs Ana is schizophrenic, hearing voices leading him to attack, while the patient who witnesses the attack has Tourette’s, making it difficult for him to explain to authorities what he witnessed and even more difficult for them to believe what he saw. There’s also the trauma of Ana’s past that guides her whole life’s choices up to this point. Even more, we see how difficult it can be for a single person to have a child, especially if they can’t conceive on their own and the only options are adoption or surrogacy.

Not only is this story entertaining, but also enlightening!

This story is fairly sad over all. The loss of Ana’s brother drives her actions later in life. It seems like she wants a child to have the love she didn’t receive from her parents, but to also have a redo of taking care of her brother. This is why she’s so sure she’ll have a baby boy and name him Edward as well.

However, a second chance at a happy ending doesn’t come out. Ana meticulously planned out everything to have her baby and make it seem like she gave birth to the baby. As with anything, though, one thing can completely change those plans. In this case, it was Robbie’s attack. Everything for Ana began to go downhill from there.

It’s very sad that Ana didn’t get her baby and she died. But this ending is slightly expected, and isn’t all bad. The baby gets to stay with her birth mom, and the mom’s husband, to have two loving parents. They even named her Anna, as if it is the second chance at a happy ending for Ana after all.